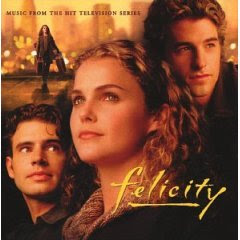 Alright, so WB Songs is probably one of the hardest things I've had to explain, but I think I finally got it. Around the Dawson's Creek, Felicity, early Smallville era, the WB network always had an amazing knack for picking music. They always managed to find unknown artists, or unkown songs from artists we know that fit their shows. There was always this feel to a WB song that was hard to explain, but I think I've got it. Soundtrack scores is to classical music, as WB music is to regular music. Here's the deal, when we listen to soundtrack scores and classical music, they're both instrumental. And while classical music evokes images and stories, soundtrack scores has one soul purpose - to evoke emotion. That's what WB songs do. I mean, they're not written to do so, but WB songs always evoke emotion. With this in mind, not every song can be a WB song. For example, Don't Look Back in Anger by Oasis, Shiver by Coldplay, Mercy by Pilate, Perfect Opening Line by the Frames, Something On by Tragically Hip are all great songs - but they aren't WB songs. Now there are some bands that are completely non-WB, there are some bands that are complete WB, and then there are some that are a mix. David Gray for the most part is WB. Gavin Degraw is completely WB. Coldplay has WB songs (Scientist, Fix You) and non-WB songs (Trouble). The Frames with the exception of 'Seven Day Mile' are not WB. Dave Matthews for the most part isn't WB (Crash maybe the exception).

Now the thing is, in recent memory, the line between what makes a WB song and what doesn't has been dramatically blurred because of a few reasons. First, Smallville, a textbook WB show started picking songs that cross the WB music barrier - they were top 40 songs that every one knew. One of the biggest things about WB songs is people usually like them instantly, they are poppy, they sound top 40ish, but they aren't actually songs that people know about in masses. So when Smallville, a WB show, started playing songs like Weapon by Matthew Good, that stupid Green Day song, and such, they started to cop out on the WB music movement, and started to confuse people about what a WB song is. Now, mind you, Smallville still has its WB song gems here and there, but as a whole Smallville is the worst WB show for WB music (especially with that selection of Weapon - amazing song, terrible WB song). Another thing that started blurring the line in recent memory is movies. Movies for sure pick music to evoke emotion, but the music, or at least the really good music that movies pick to evoke emotion usually don't fit in the WB music mold. They follow this new age indie kind of mold. Perfect example, Little Miss Sunshine has some of the best music I've heard in ages, and it's amazing for emotion evocation and just amazing to listen to and so suitable, but not really WB.

So the deal is, just at the point when I think I've defined WB music, there's a lot of things that are blurring the line. I mean the network's not even called The WB anymore. These elements that blur the line aren't by any means bad (again, I absolutely love the choice of music for Little Miss Sunshine), but it just makes it harder for me to explain WB music. Basically, WB music is like your poppy, top 40 style music that no one knows about yet that evokes emotion. Felicity was the greatest show to date to master the art of picking amazing WB music. It was amazing to listen to, not that many people knew about it at the time, and it made your life a living movie/tv show.

Again it's really hard to explain, but I have a clear vision of what a WB song is and what isn't. If you play me a song or ask me about a song, I could probably tell you instantly whether it's WB or not.

With that said, here is my Top 10 WB songs of all time (now keep in mind, they might have been WB at the time but have made their way into not being WB anymore). Basically if I were to explain WB music to people, I'd play these 10 songs for them.

10. Final Answer by The Calling
9. Feels Like Home by Chantal Kreviazuk
8. Sullivan Street by The Counting Crows
7. Angel by Sarah Mclachlan
6. Like Lovers Do by Heather Nova
5. Everything by Lifehouse
4. Hermes Bird by Remy Zero
3. Say Hello Wave Goodbye by David Gray
2. La Cienega Just Smiled by Ryan Adams
1. Come On (Instrumental) by Ben Jelen

(disclaimer: this list will probably chnage everytime you ask me about it).

Coming Soon: A Top 10 Movie Soundtrack songs - which you'll find differs quite greatly from the Top 10 WB songs, and then maybe you'll get a sense of what I'm talking about
Posted by cli23 at 10:34 PM