Keeping up with the Irwins 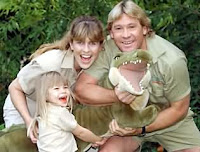 Ok, so about a week ago or so, I can't really remember exactly when, I was watching my nightly late night watching. Y'know, the Leno, Letterman, Conan circle. On Leno, he announced his second guest, some animal specialist named something er rather Irwin. And it took me a second or two, but then I think I said it aloud "No way!" thinking in my head, the crocodile hunter's wife? Sure enough it was, Terri Irwin. It was a pretty light hearted interview, with lots of warming comments about Steve. Eventually, towards the end of the interview she broke down into tears, and it was pretty sad to see. I mean, it was a sad thing when he died for sure, but it doesn't really hit home til it manifests itself in ways like a wife crying on what's generally a comedic show.

So yesterday, Terri Irwin was on Letterman, and it was kind of the same interview except that Steve and Terri's daughter was on too. And the thing is, she was a really cute, well behaved, bright eyed kid who shared the enthusiastic nature that her Dad and Mom had. You could tell they were an amazing family who all loved each other very much.

So as such, I just thought I'd give my praise to the crocodile hunter himself. I'll admit I wasn't an avid watcher of his show or other productions, but from interviews and various clips, and general publicity, there was something I abosutely admired about him - and it comes out in a lot of people. You see, Steve Irwin was one of those people who was so genuinely in love with something that he didn't care what other people thought, he didn't care about the danger, nothing - he just loved what he did to the full extent and embraced it all the way. There's too many people who grow up nowadays who get caught up in what other people think to some extent, that they don't fully indulge in their love and passion. Steve was someone who was so passionate about what he did, and again had a genuine love for what he did. It's almost like Roberto Benini - he endlessly loves his wife and is not afraid to express it in enthusiastic ways.

To me, Steve was someone who was famous, and had this awesome enthusiasm on the side. I just love that someone as famous as him was still a kid inside and just did what he loved to do. I'll be honest, I'm having a lot of trouble articulating what I'm trying to say, and I'm repeating it over and over again, but basically what it comes down to, is I think Steve Irwin is an awesome guy and represents a lot of what I love about people, and his wife and kid seem just as great. I'm not quite sure how to end this entry, so I guess I'll just say, I really respect Steve Irwin, and it's too bad we had to say goodbye to him. Thanks for reading.
Posted by cli23 at 7:28 PM

Terri and Bindi on Letterman