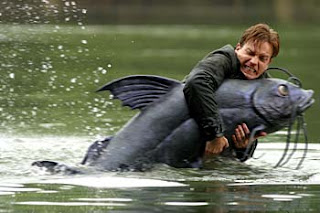 Alright, so I don't know if it's exactly underrated, but it's definitely underacknowledged - the art of making movie trailers. How many times can you recall a bad trailer...maybe 3, 4 times at most? The thing I find amazing, is that no matter how bad a movie is going to be, somehow, they manage to make the trailer good. It's really an amazing type of advertising. I mean the only time you usually say a movie is going to be bad is usually 'cause you've seen the story before, or you know the actor is bad, or whatever, but you can never criticize the trailer itself, the way it's put together, or the music that is used. It's really rare that the trailer is that atrocious. There's this level of goodness that all trailers have, and my hat goes off to the outsourced companies that make these wonderul 2-3 minute pieces of art.

Now with that said, it's not a perfect art. There are definitely some bad trailers, some really disappointing ones for movies that are great, and some music choices that are questionable. But the thing is, this usually appears in the TV spots for movies rather than the actual theatrical trailers. So keep in mind, the top 10 list below is of the theatrical trailers that you can get from the internet, and the ones you actually see in the theatre.

Another thing to note, is that you need to separate yourself from the movie itself. The Lake House was a pretty bad movie, but the trailer wasn't too bad, especially with the use of Keane's Somewhere Only We Know. In some cases, the below choices were based on the fact that the trailer was so good for a movie that was so bad. There's the opposite effect too...Office Space didn't have the greatest trailers, but it was one of the funniest comedies I can name. Actually, one of the best examples of that was probably the original Matrix. The original Matrix trailers although absolutely effective in the sense that they didn't reveal anything made the movie look not so great. And sometimes, there's a misreprentation. For example, The Village's trailer portrayed a horror suspense thriller, but The Village itself didn't concentrate on those monsters as much as the trailer purported.

So with all that in mind, the trailers below are analyzed for the trailers themselves (and considering my memory of trailers is pretty limited, this list will probably be of pretty recent movies)

9. The Transformers (the trailer released recently)
I love this one 'cause it's not at all how I would see a
Transformers trailer. Like the very quiet sound with the
short glimpses of the Transformers was done really well.

8. Finding Neverland (Trailer with Come On by Ben Jelen)
This version of the trailer is SO hard to find nowadays.

7. The Lord of the Rings: The Two Towers

6. Children of Men
The use of Hoppipolla by Sigur Ros was so perfectly
unexpected.

5. The Village
The way they showed blurs of the monsters was amazing
in creating suspense within the trailer.

3. The Matrix Reloaded/Revolutions Trailer
Opening the trailer with the green code instantly
brought the fans back to the series they all been
waiting sequels for.

2. The Lost World (Teaser Trailer)
This was short with a "Something" "has" "survived" and then
a T-Rex growl. So good.


Honourable Mentions:
300
Miami Vice (use of Jay-z/Linkin Park was brilliant)
Kingdom of Heaven (Trailer with rock music)
Harry Potter and the Prisoner of Azkaban
Cinderella Man
Spider-man 3
Red Eye (most brilliant 'screw you' to the audience)
Zodiac
Lord of the Rings: The Return of the King
Hitchhiker's Guide to the Galaxy (Trailer where they explain the common movie trailer)
Posted by cli23 at 10:42 PM