The Process of Removing Weeds from One's Garden 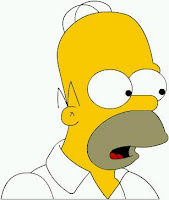 Alright, so I'm currently watching an episode of Simpsons and thought I'd write about how much I'm laughing at it. Now here's the deal - everyone knows the older episodes, say season 4-10 are a lot better than what's being churned out right now. But I think everyone's being way to hard on the Simpsons. The recent episodes although not as heart-warming, not as cohesive, and not as funny as the older episodes, they're still good. The Samsung MP3 player's not as good as the iPod, but it's still a good player. I'm still a huge fan of the Simpsons, and I still like the new episodes. In fact, in this season (18), I'm finding myself laughing a lot again. The scene with the White Stripes I thought was hilarious. Now, I will admit, that as first time straight up laughs, Family Guy is the funnier show on television right now. But I still think people are way too hard on the Simpsons right now.

Ok. Now that that's out of the way. I have to talk about one of the older episodes. The one I'm watching right now. It's the one where Homer feels "slow" and decides to teach an adult education class on the successes of marriage only to enrage Marge by telling personal secrets. Now, this episode is freakin' hilarious! There's gotta be a frequency of a joke every two minutes that's really funny. And if you're lucky enough to catch the uncut version (syndication seems to cut the really funny parts out), you're in for a real treat. Let's recap shall we?

"Something said. not good..."; "...get out of here!"
"Alright, so here's the 411. Let's say some gansta is dissin' your fly girl, you give him one of these."
"If he can teach a class, then he can teach a class, I mean I can teach a class."
"Correction Marge, 2 good jackets."
"What is a wedding? Webster's dictionary defines it as the process of removing weeds from one's garden."
"If I wanted to learn how to eat an orange, I would have taken the orange eating class."; "Eating an orange is a lot like a successful marriage."; "Just eat the damn orange!"

Plus this was back in the days when they drew Homer's scruff as a bushy beard line - I love that. Even say the way that the "he can teach a class" line is delivered is a lot more convincing than Dan has been delivering recently. Perhaps it's the dialogue, and not the delivery. Either way there is something lost in the genuineness of Homer's stupidity.

Yes, Simpsons isn't as good as it was before. But before, it was the greatest show ever. There is a lot of reasons the new episodes don't stack up to the old ones. But in my opinion, it's still a quality show, I still watch it, I'm liking the new episodes. People, give it a chance.

And here's the other thing, people keep saying the "older" ones are better. And they've been saying that probably since season 12. Now, the thing is, the same people are saying this nowadays, and considering season 12 and 13 the good episodes. This has my thinking that it's just a warming up issue. 'Cause I bet you if I named and episode from season 12-14, you'd say it was good. But back then, you were saying "these aren't as good as the old episodes". Just a thought.

Speaking of new Simpsons material, this is a whole other conversation, but I think the stuff that's coming out of the Movie is some of the funniest stuff that's come out of the Simpsons in awhile. Which has me confident that the movie's gonna be good. Check out the trailers online if you haven't already. They're all on quicktime, follow my link on my right bar. Alright. Out. Thanks for reading.
Posted by cli23 at 10:52 PM