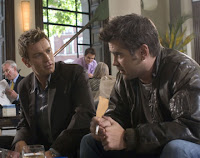 Alright, so I finished watching season 10 of Frasier yesterday, and I think it may have, just may have entered my mind as the best sitcom of all time. Yes, again, I do respect Seinfeld highly - but man, Frasier. What a season!!!

But that's not what I hear to talk about today. I've been getting back in the swing of things in terms of movies and getting caught up on what's up and coming. There's one film that really caught my eye: Cassandra's Dream. It's written and directed by Woody Allen and takes his more serious side. Don't get me wrong, I love his quirky stuff, but I love that he has the range to do other things too. And this one looks amazing. Check out the trailer at YahooMovies

And speaking of dreams, what a dream come true for me that my buddy Aaron found a performance of two of my favourite artists. Check it out:

That's it. Michael Giacchino, is damn damn close, and so is Craig Armstrong, but I have to say, at this moment, James Newton Howard is my new favourite composer. Alan Silvestri will have to step down from his throne.

In recent memory, every score that I've asked myself - I wonder who did it - it always ends up being James Newton Howard. Besides his awesome work on M. Night Shamylan movies, he's done some amazing work including Batman Begins (an amazing collaboration with Hans Zimmer), King Kong (which was done last minute), and Peter Pan (which floods Disney World commercials).

I finally got around to watching Blood Diamond yesterday. Great movie. Great score. And lo and behold - James Newton Howard was and the musical helm again.

I first took notice of James Newton Howard when he did the score for Primal Fear, but since then, he's definitely risen in my books to favourite composer. Be sure to check out his work. Thanks for reading.
Posted by cli23 at 5:44 PM 1 comment: 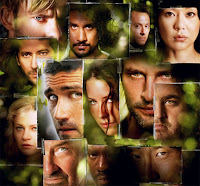 DVDs. Yes - there are many of us out there who have this condition known as DVDA - DVD addiction, where we buy endless amounts of dvds every tuesday to stock up on our already too big collection. It gets to a point where a lot of the DVDs you own you don't even watch, or touch for that matter.

But that's never been the point of a collection. If all you wanted them for is to watch -you'd probably rent them. And you definitely wouldn't buy multiple editions of the same movie. The whole point of a collection is the collection. The fact that you have so damn much to look at all nicely alphabetized in your shelves - perhaps even sorted by category.

Because so many countless hours are spent just staring at a collection - one super important factor to a collection is the aesthetics of its elements. In the case of DVDs - it's the packaging. And without question - one of the nicest packaging on any DVD has to be the seasons of Lost.

I picked up Season 3 today, and man - it just reminded me how nice their box sets are. First of all - the consistency from season to season has been great. But on top of that - the plastic slipcase has been designed so nicely, and the fold out is just gorgeous. I can't really write anything about it without sounding pretentious - so basically, it just looks so damn good.

Not too mention that its also the greatest show of all time:) Thanks for reading.
Posted by cli23 at 5:33 PM No comments: 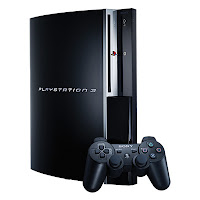