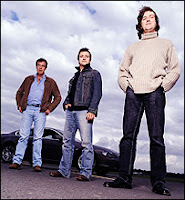 Ok, here it is. I've danced around topics on Top Gear - but finally I've decided today to post my thoughts on why Top Gear is the greatest show of all time. I was just browsing around the Top Gear website, and read Jeremy Clarkson's blog - where he asking the fans just what the new series will look and feel like and its got me all excited about the show again.

So where did it start? Well, really - with my roommate Aaron (from the NELSON blog). Usually, he and I would watch TV together like Futurama, Simpsons, Family Guy and some sitcoms here and there - and occasionally while one of us was doing homework the other would pop on a show that the other one didn't watch. Top Gear was one of Aaron's. I remember the first time I watched it I had sat in on one of the awards shows and I remember just being really confused as too what the format of the show was. I couldn't understand the live audience, and the studio setup etc. It was just very different from any North American show - radically different from any North American car show.

As time went on, I caught more and more episodes that Aaron would watch, and he'd always mention the production values but I never really took notice. The transition from knowing nothing into hardcore fan was actually pretty damn subtle. I'm not really sure when and where I said - man, this show is good.

Now, I live in North America, so its not like we get it on TV here - so we acquire it through other 'methods'. But basically, one summer, I asked Aaron to give me every episode thus, far. That was 7 series (seasons) at the time of 60 minute shows (no, not 44 minutes + commericals, true 60 minute shows). I went through this phase where I was watching at least one episode a night and that's when I really grew to appreciate the brilliance of the show.

K, let's rhyme off the reasons why its so great: its informative, its funny (really funny), its stylish, it has some of the greatest cinematography, editing, music supervision, and overall production I've ever seen, and more. Let's start with the car reviews - what the show used to be solely about. These sequences are filmed so stylishly that it just makes anyone who's handled a camera drool. And the beauty is - this is one place where its justified. Like if you put all the stylistic elements they shoot into a feature film - everyone would criticize the lack of substance and abundance of flash. But on a car show - that's all you want - flash. Now, granted - some people criticize the car reviews and being kind of vague. When Jeremy Clarkson describes every car he drives as "the greaetst car he's ever driven", its hard to guage just how good that supercar is. But if you strip away word for word analysis, the car reviews are actually quite helpful - they give you the overall impression that Clarkson, May, or Hammond have when they drive a car. I mean basically they'll give you the feel of whether or not you'd be happy with the car. Top Gear alone shattered my 20 some year opinion that 911's were the most gorgeous cars on the planet (they sold me on the DB9). They even convinced on cars like Honda Elements! The car reviews also feature great writing and it helps that Clarkson, May, and Hammond are great narrators. Yeah, nuff said about the car reviews - the segments are just so well put together its just unbelieveable.

Let's move on - how about challenges? To keep the show interesting to non-car buffs, Top Gear also features a whole whack of ssegments that would please anybody. For example, in the last series - they build a space shuttle out of a car in one of the greatest things I've ever seen on TV. How about triple challenges featuring Porsches for under 1000 pounds? Best of all - they feature amazing races across Europe (a Bugatti Veyron vs. a Plane for example!)

That not enough for the non-car buffs? How about a star in a reasonably priced car? This is where basically Top Gear becomes like The Tonight Show with Jay Leno. They have celebrities come on every week to have a track time in a cheap car. Stars in the past include Ewen McGregor, Simon Pegg, Hugh Grant, and Michael Gambon.

Now, in recent seasons, the show been taking a different direction in that it seems that car reviews are becoming more scarce and the other segements are starting to come into the spotlight (especially in Series 9), but I think the shows run recently has just been a little unstable in terms of its contract with the BBC and stuff like that.

By the way, I do appreciate North American car shows, and I do appreciate the limits they have in terms of places to shoot, the culture of cars here, and the censorship that exists in North America - but really if you've watched a North American car show - you have no idea what you're in for when you watch Top Gear. I can't stress enough how different this show is. So don't pass this off as your typical car show that's just better quality. It's a completely different genre of show.

Basically when it comes down to it - yes Simpsons, Futurama, Family Guy, Frasier, Seinfeld, Lost, Felicity, The Wonder Years have their place in the top TV shows - but really in terms of overall production, humour, information, frequency of good shows - really, Top Gear is the greatest show of all time.

Yes, Top Gear is truly awesome.
As for any criticism about the reviews not being very informative, I mean how many people are really watching the show to see a "review" on a Ferrari F430 they are going to buy. The reviews are entertaining and that is the point for this show.