My Life of Music is naNo More 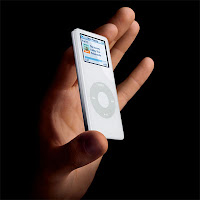 Well, that's it - the little pocket sized machine that supplies the soundtrack to my life is no more. No more music as I walk the streets of my city, no more music to work to, no more music to take my mind off how much time is left in my workout. It's really amazing how much music I listen to in life.

My iPod Nano started acting up the other day. And like I said in one of my previous blogs, yes I tried all the usual fixes. Still no solution. I even got it restored and everything, and still my problem was persisting. I decided the only way to truly reset it would be to disconnect the battery. A while back, say a couple of months, I managed to fix the fuse in my lamp (refer to one of my early, early posts), and I even opened up my Powerbook and replaced its hard drive. So I was feeling pretty good with my handiness and ability to fix things.

Thus, I decided to open up my little nano and peak inside. After poking around, I managed to crack open the thing and take a look inside. However, despite all my efforts, in the end, I had to rip the wires that were connecting the battery - and boom, end of my nano. If I can solder the wires back, I might be able to get it to work - but it's a tiny area to solder. Plus, I don't have a soldering gun.

I've had the thing for a year and a half - so I really have no justice to buy a new one quite yet. Hopefully Apple will release a new one soon to justify me spending some moolah on it.

Either way, life's gonna be a lot more boring now that I have no soundtrack to it. It's kind of depressing when I think about it. Ah well, life goes on. Thanks for reading.
Posted by cli23 at 9:52 PM