Return of the Hamster 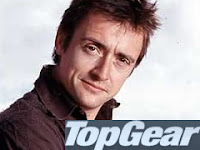 So, it's come and gone. For all those Top Gear fans, yesterday was a monumental day, if not the most monumental day in the show's history. For those who don't know, Top Gear is a long running BBC show about cars. But it ain't your typical car show - and again, at some point I will write directly about the show. Anyway, one of the beloved hosts, Richard Hammond was recording a bit on a rocket car that could be powered up to 10,000 horse power. Anyway, during the taping, a tire blew, and Hammond was in a serious accident. The show missed its scheduled return, and many including myself were holding our breaths as Hammond made a remarkable recovery.

So yesterday, Top Gear made it's triumphant return with promises of showing the recorded footage of the actual accident. I tell you - it was something. I don't know how to describe it. Like I wasn't shocked or sad or worried, 'cause the man was alive and well commenting on the video. But the feelings and thoughts that go through your head. This is probably the first time I've truly thought to myself and tried to put myself in someone else's shoes who's suffered a crazy tragedy. 'Cause the thing is, Hammond is a cheerful guy, and I remember just how affected I was by the crash. Seriously, I was probably more affected by his crash than say Princess Di's death. I don't know what it is - I think it's just when you watch someone on TV for so long, you start to feel some kind of connection to them. Say, like I've watched the Simpsons DVD commentaries religiously, and by now, I feel like I know these guys. And 'knowing' Hammond, it's such a scary thing to see something like this happen, and see him talk about it. I'm not saying Hammond's more important than Di, or the other way around. All I'm saying is that, because I've watched Hammond so much, I feel more of a connection to him than Di. If Di was on TV all every week, talking about something for an hour, and I watched it, then I probably would have felt more when she passed.

Either way, it was a really crazy thing to watch, but I'm glad Hammond's doing ok, and I'm glad they showed the footage. And when it comes down to it, I'm glad one of the greatest, if not the greatest show on TV today is back. Jeremy Clarkson, James May, and of course, Richard Hammond host Top Gear, Sunday nights at 8:00pm, on BBC2. Thanks for reading.
Posted by cli23 at 5:47 PM