In our bedroom, after the war 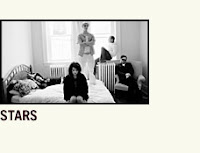 Oh I how love thee.

The Stars. One of my favourite bands to come along in the indie scene that I truly love. For those who don't know, the Stars are a band from Montreal that now falls under the monolith that is Broken Social Scene. Their first album, errr, first big album (Heart was really their first album...oh wait, I've just found out there was some album before that too:), whatever), Set Yourself on Fire, was simply amazing. The more I listen to that album, the more I appreciate it's arrangement, production, overall catchiness, and originality.

The thing that initially drew me in to that album, and probably most people, was Amy Millan's ever so sweet voice. Seriously, take one listen to anything that she sings and you'll be blown away. I've never been to any of their concerts, but apparently the crowd goes absolutely insane anytime she sings.

But their was a problem with that. You see, the Stars are made up of two vocalists: Amy Millan and Torquill Campbell. And up til now, the problem has been that Amy Millan has completely overshadowed Torquill. Most songs you'd be waiting for his part to be over to hear hers.

That's all changed though with their latest album, In our Bedroom, After the war. Thanks god for this album. I was in a music lull for a long time not finding new music for the life of me. Along came this album (not to mention the new National album), and I was back on track. I wouldn't say In our Bedroom is as good as Set yourself on fire, but it does definitely feature some of the best songs from the Stars - but even better, the balance between Amy and Torquill is the best it's ever been. I no longer wait for Torquill's part to be over. Quite the contrary. In songs like "In our Bedroom, After the war", a long grandiose epic of a song (not as grand as Sao Paolo by the Guillemots, but grand enough), Torquill is the only one who sings, with some harmony provided by Amy, and the song is amazing. Seriously amazing.

"Midnight Coward", one of my new favourite songs by the Stars, again, features such a good balance between the two. Torquill's part is just as good as Amy's.

These are only two of the tracks from this great album. An album that definitely gives shine to Torquill's talent. Of course it still reminds of of how good Amy Millan is, but then again, we never forgot did we.

Definitely check out the Stars if you haven't already. Thanks for reading.
Posted by cli23 at 11:16 PM