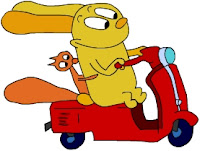 Best. Show. Ever! Brenna Jansen and I were absolutely enthralled with Untalkative Bunny back in the day. So much so that we even wrote to the creators (from Ottawa by the way) and got hi-res jpgs to make witty T-shirts!
Cheers,
-Yaseen

I'm in Singapore, and discovered Untalkative Bunny through Disney channel. I saw the cartoon once and have never looked back. It's a real gem - wholesome, sweet, funny, cute, honest. I love it.