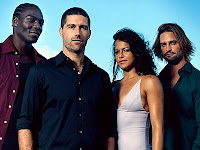 This'll be quick - but for all Lost fans - looks like we've got some great news, or at least great news in my opinion. The reason Lost has been so good has been because of its crazy anticipation for an explanation for all the craziness that happens. Well, announced today, ABC is intelligently setting an end date for Lost, giving them 48 episodes (3 seasons of 16 episodes uninterrupted) to wrap up the series. Why is this good? Well, it's good because they won't keep the show running needlessly just for ratings - they'll actually have a plan. I read an interview with Damon Lindelof where he said the plan from the beginning has always been to have around 100 episodes. So it looks like that's about what they'll get. Just like ABC said - Lost is one of those shows that to maintain integrity, it has to bow down at the right time. Looks like 48 episodes later will be that right time. Can't wait. Here's the rest of the story:

I'm bored of Lost.
I don't even care that Jack and what's her face have a secret.
I just shrugged my shoulders and said "This sucks. This show sucks".

AND, why is Jorge still fat after 4 months on the Island?
I mean... where are the bottles of Tabasco coming from at the BBQ?

I wish there was a closer end in sight.
Thinking about this show being on for 3 more seasons annoys me because they've strayed so far off course that I don't think they can reel their viewers back in.

Well, not me or my husband anyways.