Goodnight Seattle, We Love Ya' 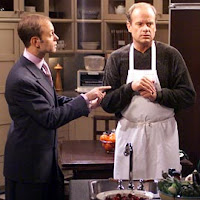 So ever since the blog has started, I've dropped lines about postings that I would do in the future. For example, in my posts about Richard Hammond's return to Top Gear,or the score for Top Gear - I would mention that eventually Top Gear would get its own post. It finally happened when I hailed it the greatest television show ever.

Another posting that I forementioned that would happen was about my favourite sitcom of all time - and here it is. My posting about Frasier.

Now, again, i do absolutely respect Seinfeld and its amazing accomplishment to never stoop to seriousness. There is never a serious moment in Seinfeld. Almost every other sitcom succombs to some amount of seriousness at one point or another. So I do respect Seinfeld for being truly orignal for that. But truth be told, I like the seriousness at times - that is, when it's done well. I've mentioned this before, but I absolutely hated Friends anytime it got serious. Mind you, I wasn't a huge fan in the first place - it was an alright show - but when it got serious, it got really annoying.

Frasier on the other hand does seriousness perfectly. It attacks the complexity of Frasier's character and does it so well. It helps that he's a psychiatrist because it presents very interesting insights into things the audience can relate to. The sweet, nice, serious moments in Fraiser are done with just the right amount of sap for a sitcom.

Let's talk about the humour. What I love about Frasier, is that it pokes fun at 2 sides of a spectrum. On one hand, it makes fun of all the pretentious snooty actions that Frasier and his brother Niles partake in. Yet, at the same time, it completely makes fun of the "regular joe" actions that they're dad is involved in. It's nice to have a show that's not so one-sided.

Experimentation. Frasier does a lot of experimentation that seems to work out really well. There's one episode where they split the storyline into two decision paths each exploring what would happen if Frasier made a different decision. The only thing they've done that's close to a clip show actually puts Frasier and Niles in past episodes through special effects. There's one entire episode that's played out as a hypothetical in Frasier's mind. And it all works so well.

The thing about Frasier is that it maintains this level of integrity and maturity, while still lacing the show with low-brow humour which is reflective of the range of characters featured on the show. It's bascially done what most sitcoms haven't - it setout to be multi-dimensinal and it actually succeeds at it. It attacks your senses on so many levels.

I recently purchased Season Nine and started watching it again - it's been a long while since Season Eight came out. From the get go - the first episode was amazing. There only remains one season to be released on DVD (since they've already released the last season), and what excites me is that the last two seasons are seasons that I've actually never seen. I haven't exactly expressed my thoughts so clearly here, but if the last two seasons are even half as good as the first nine seasons, Frasier will remain as my favourite sitcom of all time. Thanks for reading.
Posted by cli23 at 11:32 PM