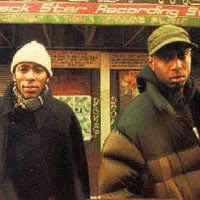 But that all changed a year or so ago, when a group of my friends and a fella named Dave Chapelle introduced me to probably the greatest hip hop in recent memory. No, I'm not talking about that lame hip hop that's being blasted around the airwaves. You see, my friends took me to see Dave Chapelle's Block Party which aside from being hilarious, showcased to me the greatest hip hop concert ever and became the start of my love affair with all the artists featured in that concert.

I'm talking Mos Def, Talib Kweli, Kanye West, Common, The Fugees, and more. Ever since I saw this movie, I've been completely sold on hip hop....errr good hip hop at least. After this, I even got my younger sister into hip hop who was quite against rap for awhile.

My point is, for those who are skeptical about the value of rap, go see Dave Chapelle's Block Party, then get your hands on the songs that I list in my next Mix of the Moment. You'll see that there's amazing music out there to be heard. Thanks for reading.
Posted by cli23 at 12:32 AM

you should also really consider 2Pac and Eminem. not the commercial stuff. ...but they are amazing. in fact..maybe i'll just make you a mix and send it to you.