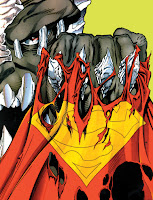 Alright, for those who've been reading my blog since the early days, I had a posting about the beauty of 2D animation. Specifically, I was praising the recent Marvel Animated Features, The Ultimate Avengers, The Ultimate Avengers 2, and The Invincible Iron Man. These were three great straight to DVD movies that deserve some recognition. Well, it seems that DC will not sit idly by while Marvel rakes in the fame and fortune - and I couldn't be more excited.

I recently, as in today, bought volume three of both the Animaniacs and Pinky and the Brain TV series. I slapped in the DVDs and was delighted with a preview of DC's first animated feature - and what a way to start - they're releasing on September 18th (same day as season 6 of Smallville), a straight to DVD animated feature based on The Death of Superman! It's being called Superman: Doomsday and although only at the animatic stage, this is shaping up to be a sweet feature.

Check out the official site here.