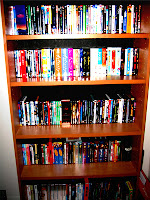 Alright, so if you've been following my recent posts, you'll know that I recently bought 3 box sets of DVDs - Animaniacs, Pinky and the Brain, and the Powerpuff Girls (yes, I neglected to mention that last one). Here's the thing. For about 6 years now, I've been collecting DVDs, and more recently Blu-rays - so my collection has definitely gotten up there in terms of numbers. Now, I've completely enjoyed this collection of mine, including all the hours of watching, the special features, the beautiful packaging, and such. But there is one thing that has constantly annoyed me - the plastic packaging! I realize it's an necessary thing to keep your DVDs nice and new - but seriously, the peel off the plastic you spend countless minutes trying to open the damn thing. What makes it hard is that you're trying to be careful not to damage the rest of the packaging at the same time. Then there's there are those security stickers that they have on each side which sometimes leave a terrible sticky residue.

Basically, there's a big hassle to opening your DVDs. Granted they're not nearly as bad as those hard plastics that can cut, but it's still a hassle. That's why this week, I was quite pleasantly surprised to find all three of my box sets packaged with an easy to open plastic system. Basically, it's plastic that just overlaps itself at the back, so you just reach under and rip it apart.

So, if I may - I'm sending a shout out to all DVD packaging companies to make it easier. Get rid of those stupid security stickers. No one steals DVDs anymore (they all just download them:)). And as for the plastic, just create this easy to rip overlap system. It'd save me previous seconds in my life.