Charlie in the Lights 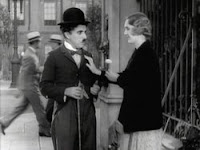 Charlie Chaplin. What comes to mind? Funny actions? Silent Films? Spoofs from a billion cartoons? The two forks in two potatoes dancing on a table?

I'm not sure what I'd say before tonight if you asked me about Charlie Chaplin. He's one of those 'classic' people who people feel like they're forced to love because everyone callls them geniuses. Say like Shakespeare or Bob Dylan or Picasso. Sometimes it's really hard growing up in our generation and not really being exposed to these works of arts and sometimes its even harder to truly appreciate them.

When I studied Shakespeare in high school - it took a long while for me to appreciate him. I found Shakespeare's works quite boring, and the poetic iambic pantameter (how's that for pretentious diction) just didn't do it for me. I don't know what it was - but this all and mighty writer just seemed overrated to me. That is until I studied Hamlet. Hamlet really got to me and Shakespeare started making sense to me. And the study of literature really started to solidify in my head during my last year in high school where I read Stone Angel and Heart of Darkness as well.

My point is, sometimes it just takes some time to become properly exposed to these so called "geniuses" before you realize for yourself how great these people are. For Charlie Chaplin, that exposure came tonight during a film history lecture.

We studied two films of his, but what really hit home for me was City Lights. It marked Charlie Chaplin's return after a couple of years of hiatus. And the interesting thing was that it was a silent film that came out after sound had been introduced for several years.

Anyway, the point is, City Lights features the 'classic' Chaplin antics - his great physical comedy. And this isn't what impressed me. What impressed me, was that the comedy was laced in with one of the best love stories I've seen in film history. It was really touching and the ending of the movie actually got to me.

This is why I love productions like City Lights and The UK Office (disclaimer: I haven't seen the US office and have no opinion on it yet). But the thing is, these two works manage to have a surface comedy that's hilarious - but underneath there is real heart and touching moments that almost play stronger becuase they are put into a comedy. It gives these works great depth. To a lesser extent, the 40 year-old Virgin does this really well too. (Although, my primary reason for liking 40 year-old Virgin isn't the nice love story underneath, it's the fact that it's just a damn hilarious movie.) Anyway, my point is, people will remember things like the Office for its comedy, but the reason its so much more is because of the parallel touching story that you never see coming.

Well, my point is, you should definitely check out Charlie Chaplin's City Lights. I am by no means an expert on Chaplin, and this is really the first film of his besides Modern Times that I've seen. And all I can say is that it's a great movie with again, one of the greatest love stories I think ever told. Thanks for reading.
Posted by cli23 at 10:28 PM