I like you, but only because you own a 3 Series 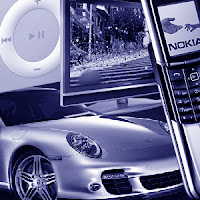 Alright, so there's a lot of cool things going on around the world including DRM being dropped by EMI, cool episode of Lost being aired (but that's a given), I just went to a decent auto show, and so forth. But I thought I'd talk about something else today (well, considering this isn't a news feed, this may not be much of a surprise).

Let's talk about Materialism vs. Enjoying Materials. 'Cause something I can't stand is the misjudgment of people who just enjoy materials but aren't materialistic. I guess the reason I can't stand it is that I think at times I can be judged to be materialistic. Just so we don't have any discrepencies of the bat, let's define what I believe as being materialistic: putting great importance on material items, even more importance that people values (spiritual, moral, family, etc.).

I am the last person to judge someone if they own a certain car, a certain computer, a certain TV, or a certain cell phone. Now, the thing is, I'll think it's cool that they own say a Porsche 911, or a Nokia 8801, but I'll never judge them as a person for owning those possessions, nor will I judge someone for not owning them.

Now on the other hand, I love materials. Like, I love Sony 1080p TVs, I love Samsung's ultra slim slider mobile phones, I love everything Apple's released, I love cars, I like nice clothes, I like nice guitars, I like nice sound systems etc. But I'd never put their importance above people. When I grow up, if I own a 911 Turbo, and my kid asks me to drive it, of course I'll let him/her. I'd never value my car over my kid.

So I guess what I'm trying to say is, people shouldn't judge others as being materialistic just because they enjoy material goods or just because someone owns a lot of nice stuff. Somewhere along the line, being successful and being able to enjoy what you want to enjoy became a bad thing. If I've loved the Porsche 911 Turbo all my life, I shouldn't be ashamed in the future if I can afford one. If I worked hard to earn the money to afford one, and I buy one - I shouldn't be labelled as materialistic. I guess some of that hatred comes from jealousy rather than a true judgment of materialism - and that's understandable- if there's someone who sympathizes with jealous people, it's me.

If you let your kid drive your porsche 911, you'd better keep your nokia 8801 ready to dial "911", because kids suck at driving, and they especially suck at driving fast cars.

So, when do you start work for apple?...or wait is it Porche, I can't remember.