Tis the season to be DVD-lly 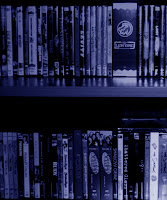 Alright, so I counted my DVDs/Blu-ray discs the other day. And after about 6 years of collecting, it would seem that I've hit over 400. Hmmm, I guess I officially have a decent sized collection.

Having a collection is kind of bittersweet. You indulge in the greatness of owning so much, and can't wait for the next releases, yet at times, you really hate spending that much money. Sometimes you're just buying things to add to your collection - say like sesaons of TV shows where you bought the first season so you can't stop now.

Well, it's that time of the year again. The most bittersweet for any DVD collector - the fall winter season. Studios start to gear up for the Christmas season by releasing pretty much every show and movie you could want if every super ultra deluxe collector's director's cut version. So I thought I'd just take some time to mention some which I'll be pocketing at some point hopefully. Starting from last week.

Avatar: The Complete Book 2 Collection (Sept. 11th release date) - Ah, yes, the little pseudo-anime kids cartoon that could. My friend Brian who's always bugging me to watch new shows got me into this one. This definitely has it's kid moments that make it not the greatest show, but what's interesting is that it's one of the few kids shows that has a serious cross episode story arc - which keeps things quite interesting.

Family Guy Volume 5 (Sept. 18th release date) - Is there really anything I need to say about this. I mean this was the series that was revived because of its DVD performance. I will say this though that this box set does feature one of my favourite episodes of the series, "Peter's Two Dads".

Smallville Season 6 (Sept. 18th release date) - Oh still struggling to survive. This series is the only WB series that I used to watch that's still on. It definitely has its moments, but as a whole, I'm more or less watching because I've followed it this far. I must admit though, this season was definitely pretty good, and season 5 definitely had a lot of strong moments.

Doomsday: The Death of Superman (Sept. 18th release date) - This is the big one. This, in all honesty, is probably one of the most anticipated for me. For my regular blog readers, they know that I've recently gotten into the Marvel Animated Features - really high-quality 2D animated straight-to-dvd movies. This is DC's first jump into the ring and what a story to start off with. I wasn't a huge comic book reader, but this was definitely one I picked up, so I'm quite excited to see this.

Reign Over Me (Oct. 9th release) - Not a perfect movie by any means, but definitely worth a see. Suprisingly funny and heartwarming at the same time. Adam Sandler's performance is great, but not to disregard Don Cheadle's equally good. It's one of those nice hidden gem movies that's actually not that hidden.

Transformers (Oct. 16th release) - Ugh - why the hell did Paramount pull out of the Blu-ray camp!!!! This is the main reason I'm angry about that. Now I've got the contemplation of buying it on DVD, or waiting for some HiDef reconciliation. Anyway, there's a nice 2-Disc release of this coming out, so be sure to check that out.

Seinfeld Season 9 (November 6th release) - November 6th is a crazy day for releases. Starting with Seinfeld, this is a beautiful year because so many of the TV series that I collect are starting to wrap up. Seinfeld ends its DVD run with the release of the 9th and final season. For those lucky enough to not have been collecting this series, there's a complete series collection arriving in a sweet oversized black book.

Cosby Show Season 5 & 6 (November 6th release) - One of the great sitcoms that's great not only because of nostalgia reasons. This is one of those shows that when revisited is just as funny, just as good. My only beef is that I can't seem to find any of these box sets since season 3 anywhere in Canada!

Ratatouille (November 6th release) - Among the best Pixar movies (and that's saying a lot), and definitely the best Brad Bird film - hmm, maybe not:) Anyway, it's such an amazing movie, and being the first Pixar film being released on Blu-ray, this is definitely quite anticipated. Not too mention the great short "Lifted" at the beginning.

Pixar Shorts Collection (November 6th release) - Just as good as their full length features, the Pixar shorts always impress. From Gerry's Game, to Lifted, to For the Birds, I don't think there's been one Pixar production that I've been disappointed by. For the first time they're being all released together, and on Blu-ray nonetheless. Should be a good buy for sure.

Lost Season 3 (December 11th release) - The show that was made for DVD. Seriously, this show is a billion times better on DVD than it is on TV. And talk about nice box sets. The packaging for these seasons is probably among my favourite. And who could forget that season finale. Damn!! I might have to go as far as saying that this is my favourite TV show of all time.

Frasier Season 10 (December 11th release) - If Lost is my favourite TV show of all time, then Frasier would have to be my favourite sitcom of all time. And this is the big one. I've seen every episode of Fraiser except for the last two seasons. And with the pre-release of Season 11 (the final season), Season 10's release marks the final releases for this show. It's gonna be a good day for DVD collectors - or at least me:)

And that's all I've got for now. I'm sure there's a whole whack more, but these are the ones I've had my eye on.

I love Pixar flicks, and We'll be adding the shorts to our collection as well.

Don't forget to get seasons 1 and 2 of It's Always Sunny In Philadelphia.